We love telling this story for a couple of reasons. The most obvious, of course, is that it’s about an advertiser who found a lot of success using AudioGO. Though the part that's way more interesting for us is the method in how they did it - multichannel marketing.

Multichannel marketing, in short, is when you combine different promotional channels to convey a single message. It might be a mix of email and Google ads. It could be TV and radio ads. Or a blend of guest blogs and PR.

But whatever the combo may be, the goal always remains the same: to maximize reach and awareness.

Which, as you'll soon find out, is something streaming audio ads and Facebook ads are extremely effective at doing together.

Boar's Head Resort is an award-winning hotel in Charlottesville, VA that offers 168 elegant rooms and suites, excellent dining, a vast array of recreational activities, a luxury spa, and over 20,000 square feet of meeting facilities on a 600-acre property in the foothills of the Blue Ridge Mountains.

Like all other hotel businesses, though, they too have their down seasons. So to combat this, the resort organizes weekend festivals to help lure away local vacationers into booking stay packages that include a couple nights of accommodations and tickets to some lively event.

To promote their 'Bubbles, Brews and BBQ' event to audiences in nearby drive markets as a way to boost off-peak room sales.

Using the AudioGO platform, Boar's Head was able to: 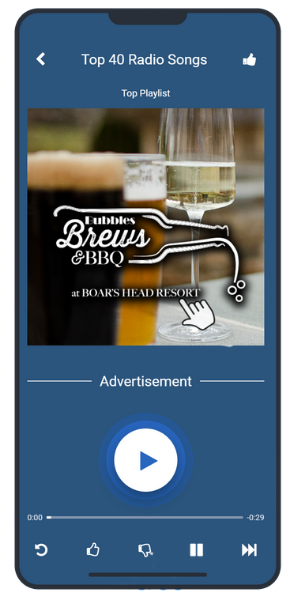 "We did see a nice uptick in room nights for the weekend. We sold about 250 tickets which was a success because it more than covered our costs - and that doesn't even include the additional revenues from the room nights. But it’s pretty safe to say that the combination of AudioGO and Facebook accounted for a huge majority of the ticket sales, and I think it really drove a lot of word-of-mouth marketing for us too."

Here are two of the bigger reasons why their AudioGO campaign worked so well for Boar's Head:

But the biggest reason why Facebook ads, in particular, pairs so well with streaming audio ads: is because they're the #1 (audio) and #2 (social) activities people spend most of their time doing on their phones.3

And by mixing the two mediums together - multichannel-ly, if you will - Joe was able to fully maximize the reach of his mobile marketing. Which, for a target audience on the move, is why he chose to use AudioGO and Facebook to promote his event in the first place. But that's not all:

"One side note about this campaign is that the event was really pulled together just a few weeks out unlike most events that have months of preparation time. With that said, I had to select what I consider 'here and now' mediums, so that’s why I chose AudioGO. I could literally get an ad up and running within 24 hours and hit a ton of people with it. I also paired this up with my Facebook and Instagram ads for that same reason – I could get them up fast. Both platforms allowed me to get huge impressions in a short amount of time."

email
Subscribe to our newsletter to not miss the next article.
close

You're minutes away from creating your first
audio advertising campaign

AudioGO can't load if you're using an ad blocker. Please disable it and refresh the page to continue.